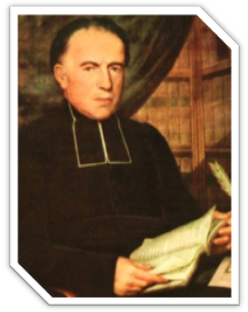 Fr. Peter Marie Mermier, our Founder, was born on 28th August 1790 in Savoy, France. At the time of his birth the population of Savoy was almost rural. The towns and villages had only a few craftsmen and shop-keepers. At the cost of hard work and strict economy, the people eked out their living by the cultivation of their land and by grazing their cattle on the mountains. Fr. Mermier’s father, Francois Mermier who belonged to a race of landowners and a family of good standing, was a peasant and the son had inherited all the qualities of a peasant: good sense, practical mind, prudent audacity, tenacious and calm perseverance. His mother, Antionette Bastian was a pious and devout woman to whom Fr. Mermier owed his fine and alert mind, his social sense and above all his first initiation into faith and sound piety. God had the first place in the home of the Mermiers. Fr. Mermier once said: “I repent for not having written anything about my mother. My God, how much I owe her. No, no, she was not an ordinary woman.”

It was the time of ‘Reign of Terror’ and little Mermier saw closing of the Church and the school of Chaumont, the belfry pulled down, the bells destroyed and the presbytery deserted. He heard his parents and others whispering about the events which devastated the country, about the priests arrested and sent to prison and to penal servitude. He was highly impressed by the lively faith of his mother and her love for God. She made her house a shelter for the faithful priests hunted down by the revolutionaries. She received them with cordial respect. He saw her comforting them, sheltering them, watching over their safety under her roof and providing them with some provisions for their departure. And when on Sundays a priest celebrated Holy Mass in the house, Peter Mermier used to remain close to his mother. He felt so happy to see her pray and receive holy communion. Later on Fr. Mermier would say, “I owe my vocation to the holiness of my mother.”

In the year 1800 religious peace was re-established in Savoy. So he could attend residential schools from 1801. Fr. Marin Ducrey was the director of the school at Melan where Peter completed his studies. He was an exemplary student, a model of virtues.

In the Autumn of the year 1807, Peter joined the Seminary in Chambery. He was an intelligent and hard working seminarist, kind to his companions. Peter Mermier was ordained Priest on 21st March 1813. He was only twenty two and a half years old.

The young Priest was appointed assistant parish priest at Magland, a countryside parish in April 1813. A perfect community life, harmony and fervour characterised his relationship with the parish priest whom he chose as his spiritual director. Fervour and kindness marked his apostolate among the people. Besides, he spent some time daily for theological studies.

In 1816, Fr. Mermier was transferred to the residential school of Melan where Fr. Ducrey wanted the services of his former disciple. He loved children, taught them and helped poor children financially.

Everything was going on well. But in 1816 Fr. Mermier interceded on behalf of Polycarp Voisin, an excellent student whom Fr. Ducrey, a strict disciplinarian wanted to dismiss. The director granted the favour and became unhappy about it. Polycarp Voisin later became a missionary.

Fr. Mermier went through a period of hesitation. He was attracted to the foreign missions. He had also an attraction for religious life and thought of joining the Society of Jesus.

In 1819, Fr. Mermier was appointed Parish Priest of Le Chatelard-en-Bauges, a dechristianized countryside parish. He worked with love and zeal for the spiritual renewal of the people but they remained indifferent. Some new initiative was necessary to touch their hearts. So Fr. Mermier decided to preach a parish mission and invited Fr. Joseph Marie Favre to help him. They began the mission on 18th November 1821. Only a few people came to attend. Disappointed, both preachers stopped the mission, went to La Grande Chartreuse, a famous Carthusian Monastery to pray and do penance.

People came to know about it. When they returned, the parishoners came in great numbers. The mission turned out to be a great success. Both friends decided to dedicate themselves to this special form of apostolate. In 1825, Fr. Mermier was given permission to be a full time preacher. From 1826, a small group of preachers began to form around him. They began to feel the need of a community to support their spiritual life and apostolate. After passing through various vicissitudes, the mission team became a closely built community living a simple, humble, joyful common life under the leadership of Fr. Mermier. On 24th October 1838, Bishop Rey gave them his approval and established them as a religious Congregation, the Missionaries of St. Francis De Sales, under the title and patronage of St. Francis de Sales.

The newly founded Congregation did immense services to the diocese of Savoy and particularly to that of Annecy. During the life-time of Fr. Mermier, the missionaries of St. Francis de Sales with the support of diocesan priests preached 573 missions in 226 parishes besides numerous retreats and similar exercises.

Fr. Mermier considered the vocation of a missionary as something beautiful, challenging, demanding total surrender to the divine providence and absolute renunciation of self will. He began negotiations to take up missions, preferably in Africa, for the evangelization of peoples in 1843. But in 1845, the Holy See entrusted to the missionaries of St. Francis de Sales the Visakhapatnam Mission which then comprised of nearly one third of India. The first batch of missionaries reached Pondicherry on 8th September 1845 and Visakhapatnam on 19th February 1846. Ever since, the MSFS have generously and powerfully contributed to the development of the church in India. The needs of the diocese of Annecy turned the attention of Fr. Mermier to another form of apostolate.

The prospects of training professors for schools in the missions in India and the hope of promoting vocations encouraged the founder to accept taking up schools. In the, autumn of 1856, the college of Evian and that of Melan were handed over to the missionaries. In the latter the Founder was a student and later professor in 1857.

Fr. Mermier insisted on constantly reviewing educational problems, a constant, affectionate, kindly presence among children and opening the hearts and minds of children to the presence of God. Fr. Mermier was open to the problems of the times. It led him to take daring initiatives.

The ancient system of patrimony meant that many young women in the country districts were left penniless. They found themselves with nowhere to go and nobody to turn to in their old age. It was not only education they lacked; they had neither dowry nor training for their marriage or the religious life as it was then known. They had no option but to utterly depend on relatives and employers who offered scarcely any favourable conditions for keeping faith and morals intact. It was to be at the service of these poor rural girls and to make them dignified and useful members of the society and the church that Fr. Mermier, together with Claudine Echernier, a village girl from Feternes, Savoy, founded the Daughters of the Cross of Chavanod. Bishop Rey gave the formal approval on 4th November 1841.

Though the Decree of Commendation (Decretum Laudis) which is the first step towards the approbation of the congregation was granted on 2nd June 1843, it was only on 19th May 1860 that the Sacred congregation of Bishops and Regulars gave the final approval. On 11th June 1858, Fr. Mermier suffered a stroke but he recovered. On 6th June 1860, he suffered another severe attack. Though doctors had given him up, he was able to be on his feet again within seven days. In 1861, he had the joy of hearing the establishment of the congregation in England through the kind services of Captain Dewel. Fr. Larive reached England on 24th May 1862.

Fr. Mermier had a fall on 10th August 1862. He suffered a double fracture of his leg. His condition grew worse. He received the sacrament of the sick on 29th September and fell asleep in the Lord in the morning on 30th September 1862. In 1903, the MSFS lost their mother house at Annecy along with the tombs of the holy founder and other early missionaries as it became the property of the state. Hence another house adjacent to it was bought making it the mother house. About six decades later, the state authorities, while digging at the site of the old mother house found the tombs of Fr. Mermier and other early MSFS confreres. It is said that when the grave of Fr. Mermier was opened in the presence of the ecclesiastical and civil authorities his body was found incorrupt, with even the vestments intact. Soon the mortal remains of the venerable founder and the other holy men were transferred to the new house on 24th October, 1960. The process of glorification of Fr. Peter Mermier has already begun and as the first step towards it he is declared as Servant of God.

Fr. Mermier had a forceful and attractive personality. He was docile, patient and loyal, totally dedicated to the pursuit of his vocation and mission. He learnt from others before proceeding to teach them. He had the gift of assimilating the intellectual and emotional influences of the society at his time. He made himself totally available to God’s will and offered himself, to the people, to the society like another St. Francis De Sales, totally disinterested, filled with zeal for the salvation of souls.

Prayer for the Glorification of Fr. Peter Mermier

Most Blessed Trinity, Father, Son and Holy Spirit, you have chosen Fr. Peter Marie Mermier, your beloved son and filled his heart with your everlasting love. You have conformed him to your own image and likeness and made him perfect in the practice of your evangelical counsels. According to the spirit of St. Francis de Sales, the Apostle of Chablais, you have inspired him with the charism of apostolic zeal, to spend himself without reserve in your sacred ministry and evangelization of your peoples at home and abroad. We implore you therefore, to exalt this humble and faithful servant you yours to the honours of the Church, as Blessed, so that together with him we may glorify your most holy name for ever and ever. Amen.

There are no upcoming events.